WHERE HAVE ALL THE DAISIES GONE? 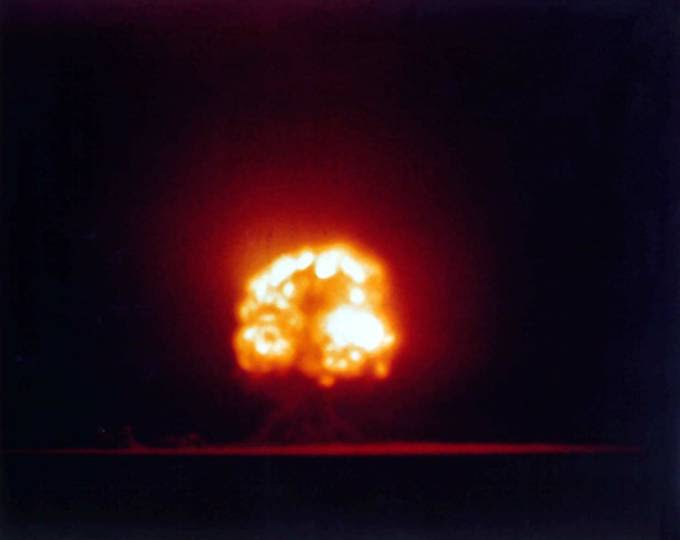 According to an Earth Day survey,
one-third of schoolchildren
between the ages of 6 and 11
think the Earth will have been destroyed
by the time they grow up.

That's great news, isn't it? Not for the Earth, I mean, but for "environmental awareness." Congratulations to Al Gore, the Sierra Club and the eco-propagandists of the public education system in doing such a terrific job of traumatizing America's moppets. Traditionally, most of the folks you see wandering the streets proclaiming the end of the world is nigh tend to be getting up there in years. It's quite something to have persuaded millions of first-graders that their best days are behind them.

Call me crazy, but I'll bet that in 15-20 years the planet will still be here, along with most of the "environment" – your flora and fauna, your polar bears and three-toed tree sloths and whatnot. But geopolitically we're in for a hell of a ride, and the world we end up with is unlikely to be as congenial as most Americans have gotten used to.

For example, Hillary Clinton said the other day that Pakistan posed a "mortal threat" to … Afghanistan? India? No, to the entire world! To listen to her, you'd think Pakistan was as scary as l'il Jimmy in the second grade's mom's SUV. She has a point: Asif Ali Zardari, the guy who's nominally running the country, isn't running anything. He's ceding more and more turf to the local branch office of the Taliban. When the topic turns up in the news, we usually get vague references to the pro-Osama crowd controlling much of the "north-west," which makes it sound as if these guys are the wilds of rural Idaho to Zardari's Beltway. In fact, they're now within some 60 miles of the capital, Islamabad – or, in American terms, a couple of I-95 exits north of Baltimore: In other words, they're within striking distance of the administrative center of a nation of over 165 million people – and its nuclear weapons. That's the "mortal threat."

What's going to stop them? Well, not Zardari. Nor his "summit" in Washington with President Barack Obama and Hamid Karzai of Afghanistan. The creation of Pakistan was the worst mistake of postwar British imperial policy, and all that's happened in the six decades since is that its pathologies have burst free of its borders and gone regional, global and, soon, perhaps nuclear. Does the Obama administration have even a limited contingency plan for the nukes if – when – the Pakistani state collapses?

It would be reassuring to think so. But I wonder.

What's the greater likelihood? That in 10 years' time things in Pakistan will be better? Or much worse? That nuclearization by basket-case dictatorships from Pyongyang to Tehran will have advanced, or been contained? That the bleak demographic arithmetic at the heart of Europe and Japan's economic woes will have accelerated, or been reversed? That a resurgent Islam's assaults on free speech and other rights (symbolized by the recent U.N. support for a global Islamic blasphemy law) will have taken hold in the Western world, or been forced to retreat?

A betting man would check the "worse" box. Because resisting the present careless drift would require global leadership. And 100 days into a new presidency Barack Obama is giving strong signals to the world that we have entered what Caroline Glick of The Jerusalem Post calls "the post-American era." At the time of Gordon Brown's visit to Washington, London took umbrage at an Obama official's off-the-record sneer to a Fleet Street reporter that "there's nothing special about Britain. You're just the same as the other 190 countries in the world. You shouldn't expect special treatment." Andy McCarthy of National Review made the sharp observation that, never mind the British, this was how the administration felt about its own country, too: America is just the same as the other 190 countries in the world. In Europe, the president was asked if he believed in "American exceptionalism," and he replied: "I believe in American exceptionalism, just as I suspect that the Brits believe in British exceptionalism and the Greeks believe in Greek exceptionalism."

Gee, thanks. A simple "no" would have sufficed. The president of the United States is telling us that American exceptionalism is no more than national chauvinism, a bit of flag-waving, of no more import than the Slovenes supporting the Slovene soccer team and the Papuans the Papuan soccer team. This means something. The world has had two millennia to learn to live without "Greek exceptionalism." It's having to get used to post-exceptional America rather more hurriedly.

It makes sense from Obama's point of view: On the domestic scene, he's determined on a transformational presidency, one that will remake the American people's relationship to their national government ("federal" doesn't seem the quite the word anymore) in terms of health care, education, eco-totalitarianism, state control of the economy and much else. With a domestic agenda as bulked up as that, the rest of the world just gets in the way.

You'll recall that, in a gimmick entirely emblematic of post-exceptional America, Hillary Clinton gave the Russians a (mistranslated) "Reset" button. The button has certainly been "reset" – to Sept. 10, to a legalistic rear-view-mirror approach to the "war on terror," in which investigating Bush officials will consume far more time and effort than de-nuking Iran. The secretary of Homeland Security's ludicrous reclassification of terrorism as "man-caused disaster," and her boneheaded statement that the Sept. 11 bombers had entered America from Canada (which would presumably make 9/11 a "Canadian man-caused disaster") exemplifies the administration's cheery indifference to all that Bush-era downer stuff.

But it's not Sept. 10. In Pakistan, a great jewel is within the barbarians' reach, the first of many. At the United Nations, the Islamic bloc's proscriptions on free speech will make it harder even to talk about these issues. In much of the West, demographic decay means the good times are never coming back: recession is permanent.

Hey, what's the big deal? Britain and France have been on the geopolitical downward slope for most of the past century, and life still seems pretty agreeable. Well, yes. But that's in part because, when a fading Britannia handed the baton to the new U.S. superpower, it was one of the least disruptive transfers of global dominance in human history. In the "post-American era," to whom does the baton get passed now?

Since January, President Obama and his team have schmoozed, ineffectively, American enemies over allies in almost every corner of the globe. If you're, say, India, following Obama's apology tour even as you watch the Taliban advancing on those Pakistani nukes, would you want to bet the future on American resolve? In Delhi, in Tokyo, in Prague, in Tel Aviv, in Bogota, they've looked at these first 100 days and drawn their own conclusions.
---

“Who will lead the 'post-American era'?
Obama crew sees U.S. as just the same as 190 other countries.”
By MARK STEYN
Syndicated columnist
Friday
24 April 09