TAKING THE BODY OF JESUS, JOSEPH OF ARIMATHEA WRAPPED IT IN FRESH LINEN AND LAID IT IN HIS OWN NEW TOMB WHICH HAD BEEN HEWN FROM A FORMATION OF ROCK 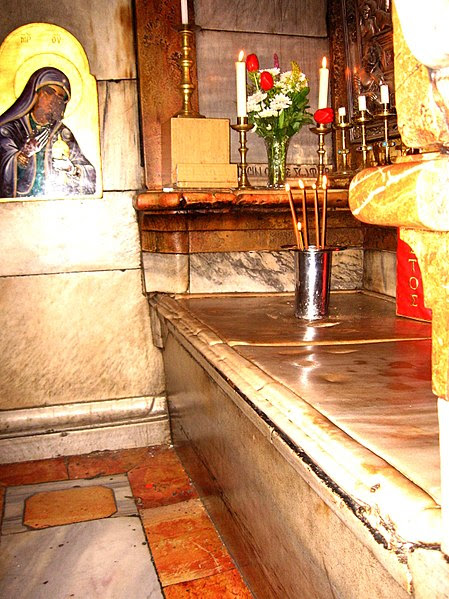 The Edicule, or Tomb of Jesus Christ, in the Basilica of the
Holy Sepulchre in Jerusalem.

Archaeological evidence shows that the tomb of Jesus had been dug out in an isolated spur of a quarry.

In a spur of the quarry the proprietor (Joseph of Arimathea at the time of the Crucifixion) had started the preparation of a family tomb.

This new tomb facing east had a low door (one had to almost kneel down to get through the passage).

It was closed by a big slab.

On entering the low opening one found himself in a vestibule leading into the funerary chamber.

Here only one funerary bench had been hewn in the northern wall of the funerary chapel (on the right hand, as one enters the tomb).

It is probable that Joseph of Arimathea had intended to finish his family tomb by digging two other funerary benches in the western and southern walls but the events of the Holy Week completely changed his plans.

And it is from this tomb and from behind this "big stone" that his victory over death was proclaimed through His Resurrection.

Today, since everything around the tomb was demolished by the Emperor Constantine and others, the tomb is free-standing
much like a masoleum, and has been completely enclosed by the vast space of the Basilica built on the site and is completely covered by marble slabs; it is unrecognizable as having been part of the quarry.