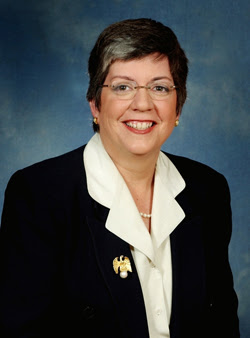 
I looked at the Department of Homeland Security report
on “right-wing extremism” myself,
and it’s every bit as bad as Michele says,
and as Roger Hedgecock and the Liberty Papers first reported.

The DHS fails to provide any specifics at all, preferring instead to smear half of the country or more as kooks for criticizing the government’s handling of the economy.
As Eli Lake reports,
the DHS has all but declared war on federalism,
which used to be the founding concept of our republic:

The Department of Homeland Security is warning law enforcement officials about a rise in “rightwing extremist activity,” saying the economic recession, the election of America’s first black president and the return of a few disgruntled war veterans could swell the ranks of white-power militias.

A footnote attached to the report by the Homeland Security Office of Intelligence and Analysis defines “rightwing extremism in the United States” as including not just racist or hate groups, but also groups that reject federal authority in favor of state or local authority.

“It may include groups and individuals that are dedicated to a single-issue, such as opposition to abortion or immigration,” the warning says.

The first question we should ask is whether the DHS is reacting to any specific threats at all? Er … no (emphasis mine):

The DHS/Office of Intelligence and Analysis (I&A) has no specific information that domestic rightwing* terrorists are currently planning acts of violence, but rightwing extremists may be gaining new recruits by playing on their fears about several emergent issues.

This gets repeated over and over again during the report. They have no threat information. In fact, the report can’t even say definitively whether “extremists” are gaining “new recruits”. In order to find that, they’d have to identify the actual groups, note the recruiting patterns, and determine whether in fact they’re gaining recruits or losing members. Bottom line: DHS has no actual data. They’re pulling threats out of their collective arse and publishing them without any supporting research whatsoever.

DHS acts as though white-supremacist groups and militias believing in Zionist world conspiracies stopped existing between 2000 and 2008. Of course they didn’t; George Bush’s strong support for Israel fed those nutcase groups for eight years. Are those groups growing in the last five months, after what DHS assumes is the trigger for all this hate — the election of Barack Obama? They provide absolutely no evidence at all for it, and in fact repeat over and over again that they don’t have that data in a hail of May Bes.

So what’s triggered their antennae?

The current economic and political climate has some similarities to the 1990s when rightwing extremism experienced a resurgence fueled largely by an economic recession, criticism about the outsourcing of jobs, and the perceived threat to U.S. power and sovereignty by other foreign powers.

In the first place, the “outsourcing of jobs” outrage didn’t get stoked by the Right. That outrage got fed by the Democrats in the last two elections, and it’s a feature of the same anti-globalization loons of the hard Left that continually disrupt G-20 summits as they violently did in London. Barack Obama himself stoked a fair share of it during the presidential campaign with his NAFTA Dance.

And should we not have some concern about the economic recession, debate about trade policy, and insist on maintaining American power and sovereignty? Since when did those topics indicate criminality and terrorism?

DHS also manages to make several hysterical references to returning veterans. I’ll highlight the weasel words and provide the translation at the end:

The possible passage of new restrictions on firearms and the return of military veterans facing significant challenges reintegrating into their communities could lead to the potential emergence of terrorist groups or lone wolf extremists capable of carrying out violent attacks.

Gee, it could lead? What evidence does DHS have of this? Oh, yeah, Timothy McVeigh was a veteran … and that’s it. I’m not joking:

So let’s be terrified of veterans! Let’s treat them all like potential suspects, even though we don’t have one iota of evidence of any wrongdoing at all. Yeah, that’s the American way.

Imagine, if you will, what the Left would say if we took this entire document and replaced all references to “military veterans” with “Muslims”, and all references to “abortion” with “universal health care”, and then predated this DHS report to 2008, during the Bush administration. They’d be screaming about being smeared as traitors for their political beliefs, and they’d be right to do so. That’s exactly what the Obama administration and Janet Napolitano has done here.

This is a disgrace. Congress should demand Napolitano’s resignation immediately, and the White House should apologize for this attack on normal political dissent.
---
THE EXECRABLE DEPARTMENT OF HOMELAND SECURITY REPORT
ON “RIGHT-WING” EXTREMISM”
by Ed Morrissey
hotair.com
14 April 09