GET RID OF THAT ANTI-OBAMA BUMPER STICKER! YOU ARE LIABLE TO BE ARRESTED FOR HATE SPEECH IN OBAMA'S SOCIALIST REPUBLIC WHERE THE STATE CONTROLS ALL 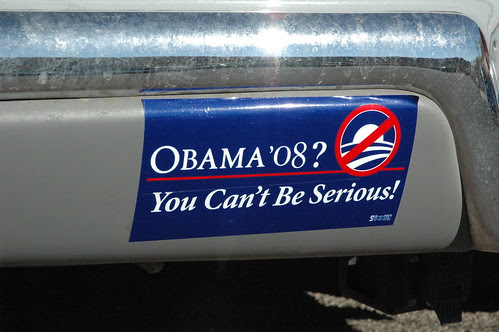 Apparently signs equal threats to some of our police:

An Oklahoma City police officer wrongly pulled over a man last week and confiscated an anti-President Barack Obama sign the man had on his vehicle.

The officer misinterpreted the sign as threatening, said Capt. Steve McCool, of the Oklahoma City Police Department, and took the sign, which read "Abort Obama, not the unborn."

Chip Harrison said he was driving to work when a police car followed him for several miles and then signaled for him to pull over.

"I pulled over, knowing I hadn't done anything wrong," Harrison said in a recent phone interview.

When the officer asked Harrison if he knew why he had been pulled over, Harrison said he did not.

"They said, 'It's because of the sign in your window,'" Harrison said.

When did cops start pulling people over for political bumper stickers or signs?

Anyway, Harrison tried to explain what the sign meant, they disagreed and he was issued a a slip of paper that said he was a part of some sort of investigation. They took his sign. Later, he's contacted by the police saying the policeman misunderstood and asking him if he wanted his sign back. They had contacted the Secret Service about the sign, and they had told the police it wasn't a threat. Except apparently they were blowing smoke:

"The Secret Service called and said they were at my house," Harrison said.

"When I was on my way there, the Secret Service called me and said they weren't going to ransack my house or anything ... they just wanted to (walk through the house) and make sure I wasn't a part of any hate groups."

Harrison said he invited the Secret Service agents into the house and they were "very cordial."

"We walked through the house and my wife and 2-year-old were in the house," Harrison said.

He said they interviewed him for about 30 minutes and then left, not finding any evidence Harrison was a threat to the president.


Walk through my house? Uh, get a warrant.

Hate groups? They knew what the sign was about, what was the rest of this about?

Which segues nicely into the next portion of the post - hate speech.

It's a fascinating post which demonstrates how hard certain groups are working another angle aimed at talk-radio (and read the comments, where commenters take the study's assertions aparat). Hate-speech is a lever that various groups on the left have been trying to enable for years. From the study, here's their definition of hate speech:

We identified four types of speech that, through negative statements, create a climate of hate and prejudice: (1) false facts [including "simple falsehoods, exaggerated statements, or decontextualized facts [that] rendered the statements misleading"], (2) flawed argumentation, (3) divisive language, and (4) dehumanizing metaphors (table 1).

Table 1. Analysis of Hate Speech from The John & Ken Show

EXAMPLE
"And this is all under the Gavin Newsom administration and the Gavin Newsom policy in San Francisco of letting underage illegal alien criminals loose" (from the July 21, 2008, broadcast).

FLAWED ARGUMENTATION
Guilt by association is used to make the hosts' point. Undocumented youth and those who are perceived as their endorsers at the institutional level are stigmatized by being associated with criminality.

DIVISIVE LANGUAGE
Criminalized undocumented youth and their perceived validators (Gavin Newsom and the sanctuary policy) are depicted as a threat to San Francisco citizens, setting up an "us versus them" opposition.


Talk about over-analysis. The bottom line is this matrix of assessment is based in pure biased opinion disguised as objectivity. Hate speech, in this case, is nothing more than saying "letting underage illegal alien criminals loose" is wrong.

The vagueness and potential breadth of the phrase "hate speech" is a pretty substantial reason -- though just one among many -- to resist the calls for a "hate speech" exception to the First Amendment. And the vagueness and potential breadth is also a reason to be skeptical of uses of the phrase even outside the law: It's very easy to define "hate speech" as you like (or leave it undefined, as some arguments do), and use it to condemn people who express a wide range of views that you disapprove of.


One of the most defining phrases in the history of America free speech is "I may not agree with what you say, but I will defend to the death your right to say it."

It has never been "I don't like what you say, it sounds like "hate speech" to me and so you should be silenced".