THE GUIDING PRINCIPLE OF WINSTON CHURCHILL'S LIFE WAS TO "NEVER GIVE UP". CONSERVATIVES NEED TO LIVE BY THAT PRINCIPLE IN THE OBAMANATION 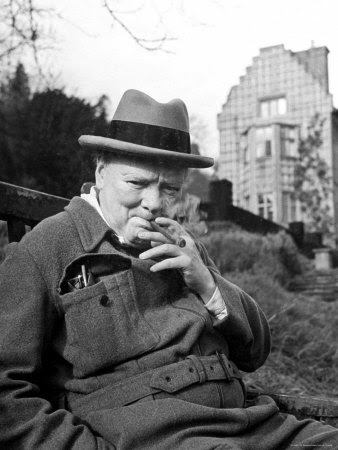 One of the most admired (and sometimes feared) persons
in public life in the 20th Century was the indomitable Winston Churchill.
He had an incisive mind and an unsurpassed mastery of the English language.

Perhaps the most notable of all Churchillian characteristics
was his refusal to give up during the most adverse situations. In
June 1965, only a few months before his death, he was asked to give the commencement address at a university in England. He was so infirm that he had to be helped to the podium. Once he got there he stood in silence for a long time. Then that great voice that had once called Britain back from the edge of despair sounded for the last time in public. Churchill said, "Never give up! Never give up!", and he sat down. There was a long silence, and the audience rose to their feet and gave a resounding applause. That was quintessential Churchill.

It was reminiscent of his June 1940 speech in the House of Commons as England tottered on the edge of defeat by Hitler. This is what he said to that downcast body:

The photographer who had been photographing Churchill on his eightieth birthday said courteously that he hoped he would photograph him on his hundredth. "I don't see why not, young man", said Churchill. "You look reasonably fit to me".

Churchill's political career had been pronounced dead on several occasions, but he never gave up and he always came back. His spirit was evident at his funeral service which was held at St. Paul's Cathedral. He had planned his funeral carefully.

There were some of the great hymns and, of course, the splendid liturgy of the Anglican Church. But there were two things he planned which made his funeral service as unforgettable as his life. When the benediction was said, there was a long silence. Then a bugler high in the dome of St. Paul's sounded the familiar notes of "Taps", the classic military signal of the end of the day. After another silence another bugler high up in the dome began to play "Reveille", the signal of the beginning of a new day. It was quintessential Churchill.

I thought of Churchill and Churchill's funeral on this first week after Easter as I reflected on the Crucifixion and the Resurrection. We are people of the second bugle. Sometimes down, but never out.

His usurpation cannot be corrected by Congress,
it can only be corrected by his resignation, his removal
or
by an amendment to the Constitution
which will never happen.
Posted by Leo Rugiens at 3:05 PM