IF GASOLINE WILL COST $8.00 PER GALLON IN THE OBAMANATION THE GREENS WILL BE HAPPY AND THE POOR WILL SUFFER 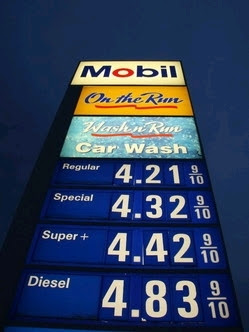 TESTIFYING BEFORE
the House Energy and Commerce Committee
last week, Energy Secretary Steven Chu
was asked about something he said in September.
"Somehow," the Nobel laureate had told The Wall Street Journal, "we have to figure out how to boost the price of gasoline to the levels in Europe."
At the time, gasoline in Europe was going for around $8 a gallon.
Did the secretary, Florida Representative Cliff Stearns inquired,
still want to see US gas prices rise that high?

"In today's economic climate," Chu quickly replied, "it would be completely unwise to want to increase the price of gasoline. And so we are looking forward to reducing the price of transportation in the American family . . . by encouraging fuel-efficient cars (and) developing alternative forms of fuel."

The congressman couldn't resist giving the knife a twist.

"Your statement, 'Somehow we have to figure out how to boost the price of gasoline to the levels in Europe' -- doesn't that sound a little bit silly in retrospect?" Stearns asked. 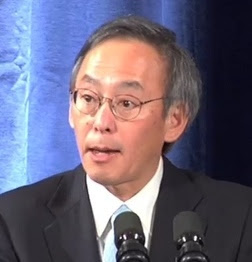 Stearns didn't ask why Chu had stopped being "silly," but it doesn't take a Ph.D. in political science to know that a craving for higher gas prices is one of those things you quit talking about after you join a presidential administration -- assuming you want the president to be reelected.

Yet Chu is hardly the first person to have called for making gasoline more expensive. As far back as his first US Senate campaign in 1984, for example, John Kerry advocated a 50-cent-per-gallon increase in gas taxes. Many environmental activists, climate alarmists, and mass-transit fetishists want to see fuel costs rise -- even as high as, yes, $8 a gallon. The steeper the price at the pump, they reason, the fewer miles Americans will drive, the less petroleum they will consume, and the greener their lifestyles will become.

"I hope gas prices go as high as they have to go to get the rest of these morons off the road in these big Hummers," CNN's Jack Cafferty has said, while Freakonomics author Steven Levitt wrote in 2007 -- in an essay headlined "Hurray for High Gas Prices!" -- that "rather than bemoaning the high price of gas, we should be celebrating it." Last year, The New York Times's Thomas Friedman sang the praises of $4-a-gallon gasoline, and wished "Washington would declare that it would never let the price fall below that level." Even Barack Obama, asked on the campaign trail whether sky-high gas prices might actually be a good thing, objected only to the speed with which they had climbed. "I think I would have preferred a gradual adjustment," he told CNBC.

Those are fringe opinions, of course. Most Americans don't regard automobiles as a blight and don't blame human activity for global warming, so it goes without saying that most of them don't want fuel prices to rise. For those who do believe that cars are a curse and climate change is caused by people, however, it makes perfect sense to call for more expensive gasoline.

Raise the price of something high enough and you invariably lower the demand for it. That's why last year's sharp spike in gas prices resulted in fewer cars on the highways and a plunge in miles driven. If your goal is fewer SUVs, less solo driving, and lower carbon-dioxide emissions, inflicting European-level gasoline prices on American motorists is a pretty good strategy. Conversely, it is hypocritical -- or at least illogical -- "to say you care deeply about global warming and advocate for the price of gas to go down," as AutoNation CEO Mike Jackson told Newsweek last year. "Those are mutually exclusive concepts."

And yet advocating for the price of gas to go down is essentially what environmentalists are doing when they clamor for higher-mileage cars. All other things being equal, raising fuel efficiency lowers the cost of driving. As Secretary Chu correctly told the House committee last week, "encouraging fuel-efficient cars" is one means of "reducing the price of transportation." But cheaper driving means more driving, and more driving means more energy use, more cars on the road, more demand for highways, more drilling for oil -- all things environmentalists abhor.

If greens and global-warmists really want the US automotive fleet to use less energy, they should be clamoring for cars that get lower mileage. Crazy, you say? Surely no crazier than $8-a-gallon gas.
---
$8 GASOLINE AND THE GREEN AGENDA
by Jeff Jacoby
THE BOSTON GLOBE
26 April 09