WITH THE DEATH OF FATHER STANLEY JAKI, OSB (MAY HE REST IN PEACE) THE CHURCH AND THE WORLD HAS LOST A GREAT SCIENTIST, AND A GREAT RELIGIOUS MAN 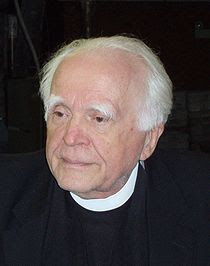 Leo Rugiens mourns the passing of a friend, a great priest, a great scientist, a great person: Father Stanley L. Jaki, OSB.
We first met when he arrived in the United States in 1956, a refugee from the Russian takeover of his native Hungary where he was a monk in the famous
Hungarian Benedictine monastery, Panonhalma.
Here is his curriculum vitae from Wikipedia:

Stanley L. Jaki, OSB (born August 17, 1924, Győr, Hungary; died April 7, 2009, Madrid, Spain) was a Benedictine priest and Distinguished Professor of Physics at Seton Hall University, New Jersey since 1975. He was a leading thinker in the philosophy of science, theology, and on issues where the two disciplines meet and diverge.

After completing undergraduate training in philosophy, theology and mathematics, Father Jaki did graduate work in theology and physics and holds doctorates in theology from the Pontifical Institute in Rome (1950), and in physics from Fordham University (1958), where he studied under the Nobel laureate Victor Hess, the co-discoverer of cosmic rays. He also did post-doctoral research in Philosophy of Science at Stanford University, UC Berkeley, Princeton University and Institute for Advanced Study, Princeton.

Father Jaki authored more than two dozen books on the relation between modern science and orthodox Christianity. He was Fremantle Lecturer at Balliol College, Oxford (1977), Hoyt Fellow at Yale University (1980) and Farmington Institute Lecturer at Oxford University (1988-1989). He was the Gifford Lecturer at Edinburgh University in 1974-75 and 1975-76. In 1987, he was awarded the Templeton Prize for furthering understanding of science and religion.

Jaki was also among the first to claim that Gödel's incompleteness theorem is relevant for theories of everything (TOE) in theoretical physics. Gödel's theorem states that any mathematical theory that includes certain basic facts of number theory (and is computably enumerable, i.e. whose formulas can be explicitly listed) will be either incomplete or inconsistent. Since any 'theory of everything' will certainly be consistent, it must be either incomplete or unable to prove basic facts about the integers.

Father Jaki died on April 7, 2009, at about 1:15 PM (MET) in the Intensive Care Unit of the Clinica de la Conception in Madrid (Spain). He was in Spain to visit friends on his way back to the USA, after delivering some lectures in Rome, for the Master in Faith and Science of the Pontificio Ateneo Regina Apostolorum. He died from the consequences of a heart attack he suffered (without realizing it) while still in Rome. When he arrived in Madrid on March 27, 2009, he was brought to the hospital almost immediately . He remained fully conscious for two days, but then was sedated for medical reasons; he died without regaining consciousness. Four of his friends were holding his hands and praying for him.